On a damp and misty morning back in the 1960ties – those prehistoric times when the prevailing Nationalist government kept us cut off from reality with the absence of TV – when everyone else in the household seemed to be busy and preoccupied, I did what children did in those days; I looked for something to read.

The cyclonic Eastern Cape drizzle seemed set to last for days.  It was school holidays and with the rain precluding swimming and tennis, a good book was needed.  Scanning the study bookshelves,  my index finger came to rest on an older, hardcover book titled ‘Anne of Green Gables.’  My elder sister’s name was inscribed on the flyleaf.  I skimmed over the first page and was transported instantly from East London on the South African East Coast, to Prince Edward Island, off the East Coast of Canada – continents and oceans and a different hemisphere away from my reality.  I was lost.  The weather was forgotten.  If anything, sunshine would have meant outdoor commitments drawing me away from the comfort of my bed where I sat propped up against pillows, snuggled under my Auntie Jean’s crochet rug for the rest of the day and, with the exception of a reluctant presence at mealtimes, the rest of that grey, drizzly weekend.

Half a century of my life has happened since then and yet I remember it as though it were yesterday.  So heightened were my senses, I can still feel my slightly scratchy bedspread, see my girlhood bedroom and hear the soft swish of rain at my window.

My first wish imprinted itself on a ‘bucket list’ that weekend – years and years before the phrase had even been coined – and there it has languished, unchanged, until now.  Since that wet, cool morning in 1967 I have yearned to visit Prince Edward Island where “the shore road was woodsy, wild and lonesome.” 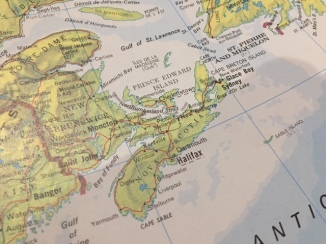 As soon as I’d finished the book I lent it to my best friend, Glynis James, and together over the next several months we worked our way through the whole ‘Anne’ series and found lots to discuss and laugh about as we shared Anne’s adventures, her teenage years and then adulthood.  I think we both fell a little in love with Gilbert Blythe, we thought Marilla Cuthbert a little on the stern side, we loved Matthew and wept over his death – just as I did when I reread the book a few weeks ago

I was enchanted by the idea of Prince Edward Island and L M Montgomery’s beautiful descriptions of its landscape. I think ‘Green Gables’ was the first fictional house I ever fell in love with and although many other literary homes have been added to that list, Green Gables remains at the top.

Years passed and life changed.  Glynis coincidentally moved to Canada in the early 1980ties and settled in a town somewhere south of Toronto but we never gave up on the idea of meeting on Prince Edward Island one day.  In a fascinating turn of events, Glynis’ daughter, a beautiful musical drama actress, landed the part of Jose Pye in the Anne of Green Gables summer production for two seasons in a row.  I longed to get there to see her on the stage but other commitments conspired against it.

But then we both turned sixty; me down here and Glynis up and over there and it just seemed like a good idea to make this dream of approximately fifty years a reality.  And so it happens that tonight will see me leaving on the first leg of a journey to Prince Edward Island and then beyond to other far reaches of Canada.  I will meet Glynis – a “kindred spirit” if ever there was one – in Charlottetown, PEI on Tuesday morning and we will have a few days reliving those magical books, reminiscing and catching up.  I will also finally get to see snippets of the Canadian life of one of dearest and definitely oldest friends, or as Anne Shirley would have said “my bosom friend…”  How we used to giggle over that phrase at the age of 10.

Prince Edward Island, worlds away from Africa and 50 years down the line, here I come.