Abracadabra and a puff of smoke were all that was lacking when that yellow, AA-affiliated tow truck materialised directly opposite us on the busy N3 highway between Durban and Johannesburg.

Until that moment, it had been a lovely drive. After leaving Champagne Castle Hotel in the Drakensberg at about 10am, we’d taken a detour to visit the Spioenkop Battle Memorial site.  We’d heard a lecture on this ill-fated Anglo Boer War encounter two nights earlier and this was a perfect opportunity to put it all into perspective so soon afterwards.

Getting there had involved driving on some rough, stony, farm roads. We remembered friends who had dealt with numerous punctures on similar roads over years of visiting their Karoo family farm, but all was well when we left the battle site.

Passing flourishing farms and climbing the Olifantshoek Pass, we marvelled at the expansive beauty and wide-sky scenery of Natal and the Orange Free State and decided that these were parts of South Africa we needed to get to know better.  The beguiling Border Post farm shop and restaurant enticed us in for coffee after which we set course for home.

And now this. A puncture.

We’d been on the side of the road less than ten minutes when it became clear we were not going to be able to change the shredded, left back tyre unaided.  All the necessary tools were (surprisingly) in place but the jack, long unused, appeared to have jammed itself into one unhelpful position from which it refused to budge.

About 15 kilometres north of Warden and unable to limp back there, calling the AA seemed the best option.

In the split second that the call was answered, before we’d had time to give either our name, membership number or location, the vehicle we most wanted to see, but assumed we’d have to wait at least an hour for, manifested itself right across the road.  Neither of us had seen it coming. One minute we were looking down at membership cards and numbers and seconds later we were looking – in total disbelief – at the driver of an AA truck who was asking if we needed help. For a moment, reality was suspended.  What had just happened and how?

If we were confused, the lady who’d answered our call at the AA Call Centre was even more so.  The organisation prides itself on its response times but this defied belief and when Jannie, a one-time hippie if ever there was one, swung his truck across the road and introduced himself, he couldn’t have seemed more like an angel than if he’d grown wings and flown us and our car back to Warden.

Jannie. Angel with a Tow Truck. 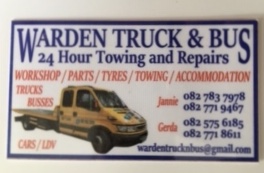 As it was, our journey was a little more prosaic. Our car was unceremoniously  hauled onto the flatbed and we were bundled into the cab and all transported – quite briskly – back to Warden and Jannie’s workshop.

A new tyre had to be ordered and then collected from Harriesmith, even further back down the highway.  We had ample time to reflect on our good fortune while we waited for three hours in the shade of a pepper tree in Jannie’s garden, surrounded by a menagerie of livestock. I should perhaps mention that we were well entertained during that time by Jannie’s 7-year-old, lively, very busy, Afrikaans-speaking granddaughter.  My rusty Afrikaans emerged from somewhere and my conversational skills improved dramatically during those hours under the pepper tree. We could only be impressed by the ingenuity she showed in making the most of her surroundings, including treating us to a ‘puppet show’ with a theatre created from an old cardboard box and cookie cutters for puppets.  I should have filmed it. 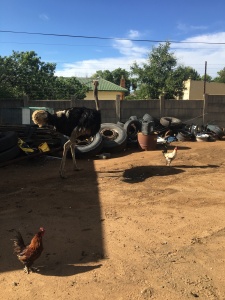 Just some of the menagerie. Spot the ostrich.

We knew we didn’t deserve this luck. A warning light had appeared on the dashboard about half an hour before disaster struck.  We’d pulled over and a ‘tyre inspection’ (in which I had no part…) had ensued which involved giving each wheel a hefty kick before a decision was reached: nothing seemed amiss.  We considered pulling into Warden to double-check but as all seemed to be going well, we sallied on undaunted…

Had we not eventually ground to a halt at precisely the moment we did in precisely the place we did, we might have missed Jannie altogether. Had he been driving an ‘ordinary’ tow truck as opposed to a ‘flatbed’ one, he’d have had to go on to Warden to change vehicles before coming back to us.  By then, the Harriesmith tyre supplier would have been closed and we’d have ended up having to stay overnight somewhere in Warden. It was not an appealing thought.  While showing me the bathroom in what appeared to be overnight accommodation, the child entertaining us had pointed out a door at the end of a corridor.  “En as Tannie se motor nie klaar is nie en Tannie moet hier slaap, dan moet Tannie NOOIT hierdie deur oopmaak nie.  As Tannie hierdie deur oopmaak sal die honde daar buite Tannie OPEET.'(Which translates roughly as ‘If Auntie’s car isn’t fixed and you have to sleep here, DO NOT open that door cause if you do, the dogs outside will eat you up!’)

We’d already counted about 8 dogs so what remained behind that closed door was anybody’s guess. Needless to say, at that point I was ready to walk back to a B&B in Harrismith if necessary…

Our day, which had started with a champagne breakfast in the sparkling Drakensberg air, had taken some unexpected turns and led us to some surprising places. 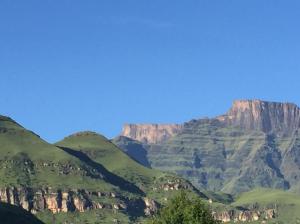 Some might call the events serendipitous and others might say that angels can appear in unexpected guises. My more fanciful self leans towards the latter.  I said this to Jannie and he looked abashed, shook his head and got back to work on the troublesome tyre. But I learned something new on Monday afternoon:  It seems not all angels come with wings; some come with tattoos and tow trucks instead. Look out for them.

Back on the Road

One thought on “Serendipity – 0r Some Angels have Tow Trucks”