(Last week we attended our 5th Sunset Serenade weekend in the Kruger Park and I wrote a short post on Facebook giving contact details for anyone who might be interested in going next year.  A few people asked if I would write a blog post about the experience so I am reposting this article I wrote 4 years ago.  Very little has changed, other than the fact that the concerts are now held in May because the weather conditions are better for the musicians, and that sadly, the incidence of elephant poaching is now the rise again too, to the problem is bigger.  Contact Tina Schmidt at http://www.sanparksvolunteers.org if you’re interested in being part of this special event.)

Every September something very special happens in the Kruger National Park:  For the past 13 years, six talented classical musicians have taken time out from their usual performing and teaching schedules, to give a series of concerts out in the bush in aid of the rhino counter-poaching activities.  Two separate four day events are held and they are organised by South African National Parks  Honorary Rangers with the help of several sponsors. 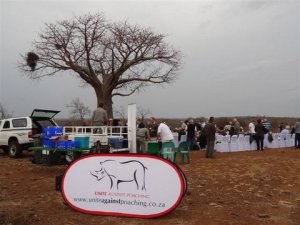 The performers are a harpist, a cellist, two violinists, a violist and a flautist and this year they put together concerts entitled ‘Olifants Music Meander’, ‘Sunset Symphony’ and ‘Dancing in the Dark’ .  Each concert included pieces by a wide range of composers including Handel, Vivaldi, Bach, Mozart and, from more recent times, Gerry Rafferty, Mancini and even John Denver. 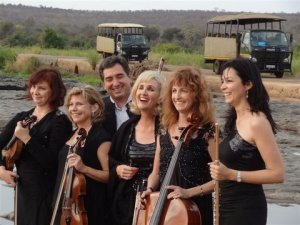 The whole event starts on a Wednesday when approximately 120 guests arrive at the chosen camp (this time it was Olifants) and get settled in.  Mornings and early afternoons are free to be spent in the usual ‘game reserve’ way and from the Thursday, at 4pm, everyone gathers at the reception area to be driven by rangers to a surprise destination somewhere out in what appears to be the middle of nowhere.  No matter how familiar one is with the concept, there is always a moment of stunned surprise as the lumbering vehicle heaves itself over a hill or round a bend and there before you, in a dusty clearing, usually on a river bank, are the musicians warming up in a little, open-air, casually arranged “auditorium.” 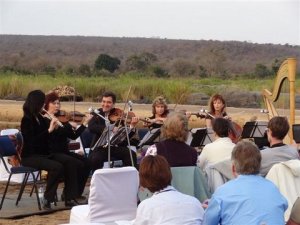 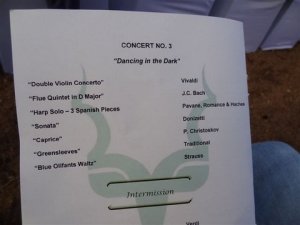 There is no standing on ceremony.  A small bar dispenses wine, water and – not to be missed – Amarula on ice, everyone settles down with cooler bags and biltong and the concert begins.  Sitting under a darkening bushveld sky, watching an incomparable African sunset to the strains of Verdi – or even better – some traditional African music – is almost impossible to describe.  Rangers keep a close eye on the surrounding bush but it seems the hippo are content to join in with snorting applause in the short breaks while birds – and sometimes bats – swoop overhead as dusk surrenders to darkness. 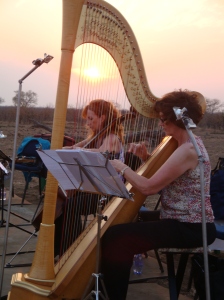 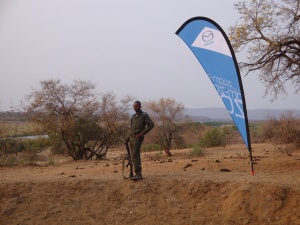 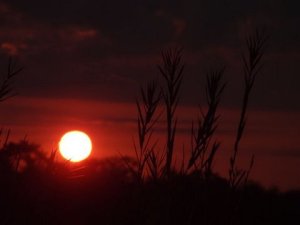 Only in Africa (Photo: Colin Little)

After a short interval, the second half of the concert unfolds under spangle of southern stars and The Milky Way and Southern Cross blaze down at us from the coal-black, smog-free night sky. Eventually, after several encores, the orchestra is reluctantly released and everyone is delivered – along dark and deserted roads – safely back to dinner at the camp.  Sometimes the journey home is enlivened by nocturnal prowlers.  Dinner can be postponed happily for hyena, bushbabies, watchful owls and other night time entertainment.

There is something so unique and beguiling about this experience that it is easy to forget, at times, the tragedy of the reason behind it.  The lowest point of this particular weekend was hearing from a ranger that yet another rhino had been slaughtered just the previous day close to the Phalaborwa Gate.  Fortunately her bewildered calf was rescued  before falling prey to predators of the animal variety.  The rhino death toll stands at well over three hundred for this year alone and according to an article in the September issue of Getaway magazine, is “expected to reach 595 by the end of the year.”  Rhinos have been around for about 30 million years and now suddenly, because of guns, greed and ignorance or misinformation, they could become extinct in our lifetime.  It doesn’t bear thinking about. 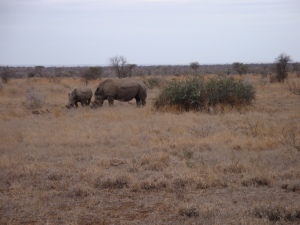 2 thoughts on “Bach in the Bush – or Sunset Serenade”